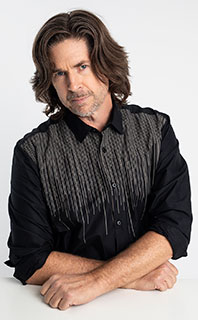 John Crawford is an American singer-songwriter whose contributions to Berlin were an essential part of the band’s rise to fame in the early 1980’s.

Crawford's career as a musician began in junior high after breaking his leg during a basketball game. In an attempt to fight off the boredom of being injured, Crawford picked up a guitar and began taking lessons at a musical instrument retailer in nearby Fullerton, CA, where his teacher put him in touch with future Berlin band members Dan Van Patten and Chris Velasco. The three soon formed a band called The Toys with vocalist Ty Cobb at the helm. Crawford, Cobb and the others were influenced by then-current punk rockers like the Sex Pistols along with Synthpop band Ultravox, though Crawford has cited KISS as an early influence as well. After a name change to Berlin, Cobb was out and a string of vocalists ensued. In 1980, Berlin released the EP Information on Zone H. Records with Virginia Macolino fronting the group. The band signed to I.R.S. Records in 1980, releasing the single "A Matter of Time", before suddenly disbanding in 1981.

With Berlin on hiatus, Crawford set to work building up his bass chops with another Orange County CA based band, The Videos, with Craig Sibley on vocals and guitars, Rich West on keyboards, Ken Dudley on guitars, and John Benson on drums, and as a vocalist for Fahrenheit, a synthesizer pop quartet in the order of Depeche Mode and Ultravox, for which Crawford also played occasional bass and acoustic guitar. Along with Van Patten as synthesist and drum machine programmer, Fahrenheit included West (later of Stacey Q’s band) and Keith Walsh, both on synths as well.

Sometime around the formation of Fahrenheit in late 1981, the Los Angeles-based independent label M.A.O. Records released a new Berlin single, featuring the songs The “Metro” and “Tell Me Why”, with Terri Nunn on vocals. It wasn't until 1982's platinum-selling Pleasure Victim, however, that Crawford's music gained an audience. Crawford had a hand in penning all of the disc's songs except for “Masquerade”, a song written by guitarist and original Berlin member Chris Ruiz-Velasco. Crawford attributes the album's themes of love gone wrong to post-adolescent heartache, which seemed to resonate with listeners, as Pleasure Victim became, for a while, the most successful independent EP ever released.